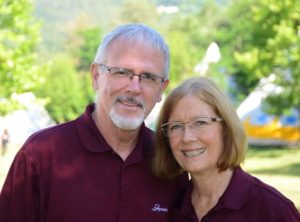 Dave and Cindy Bintz have been full time at L’Arcada since May of 2014 with Dave serving as the Sports Director of the camp. They began serving on short term assignments and helping in the Basketball Camps in 2009 and came back several summers before God called them to Spain! They have been challenged to expand the sports camps and broaden its exposure to more Spanish young people.

Having been in Christian ministry for over 35 years in the USA helped them as they transitioned from ministering to athletes in Christian Schools to being given the privilege of ministering to mostly non-Christian athletes in Spain. Dave and Cindy served many years in St. Petersburg, Florida, but are originally from New Jersey. They have three children and nine grandchildren.

When they have free time, they enjoy walks around their hometown of Banyoles, going to the market and drinking Spanish coffee!

This website uses cookies to improve your experience while you navigate through the website. Out of these cookies, the cookies that are categorized as necessary are stored on your browser as they are essential for the working of basic functionalities of the website. We also use third-party cookies that help us analyze and understand how you use this website. These cookies will be stored in your browser only with your consent. You also have the option to opt-out of these cookies. But opting out of some of these cookies may have an effect on your browsing experience.
Necessary Siempre activado
Necessary cookies are absolutely essential for the website to function properly. This category only includes cookies that ensures basic functionalities and security features of the website. These cookies do not store any personal information.
Functional
Functional cookies help to perform certain functionalities like sharing the content of the website on social media platforms, collect feedbacks, and other third-party features.
Performance
Performance cookies are used to understand and analyze the key performance indexes of the website which helps in delivering a better user experience for the visitors.
Analytics
Analytical cookies are used to understand how visitors interact with the website. These cookies help provide information on metrics the number of visitors, bounce rate, traffic source, etc.
Advertisement
Advertisement cookies are used to provide visitors with relevant ads and marketing campaigns. These cookies track visitors across websites and collect information to provide customized ads.
Others
Other uncategorized cookies are those that are being analyzed and have not been classified into a category as yet.
GUARDAR Y ACEPTAR
Funciona con